(((Thanks for your patience! Most standard devices in stock, and many custom devices in the reverb.com customshop)))

My name is Darren and I play rhythm guitar for Ancient Warlocks. Before playing guitar I played bass. I usually like to say that I consider my role in this band to be almost as much ‘second bass’ as rhythm guitarist. As you can imagine the first thing I need is a fuzz that isn’t going to totally squelch my low end. I had met with limited and varying success with several different Muff type pedals and had even arrived at one I was pretty comfortable settling with. It allowed me the attack I wanted and through turning up the bass on my amp (too much) I was able to get something very close to what I wanted. But I was still looking for something. I have some vintage Muffs that are just so full and huge and overwhelming sounding but they all had issues with what I consider to be a weak farty attack at the settings where I thought they sounded best. And while my go-to pedal had the attack dialed, it lacked the fatness of the vintage units.

I saw the Pharaoh being talked about on a pedal forum and was attracted to the sweet graphics. Then I looked under the hood. Being a hobbyist pedal builder myself I was impressed at the layout and build quality. I occasionally see pedals costing twice as much and more with maybe only half the build quality. Or less. So I was intrigued to say the least. My first thought was “this thing must cost $400” and I walked away from the computer. But I couldn’t stop thinking about it so later on I dug into the blog and the myspace. The samples were rad and I was starting to get really excited but somehow I missed the really obviously posted price of the thing and I walked away a second time thinking it sounded killer but was out of my wallet’s miserable reach. But I decided later that day that I needed to hear the samples again and when I went back I finally noticed the price. Holy shit! I ordered one instantly and set about waiting.

Three days later I opened the box and pulled out my freshly minted Pharaoh #23. It looked beautiful but who cares?! I went and fired it up with my little practice amp (hot rod 18 watt type thing). It sounded great! But I was totally overwhelmed by the unusual tone controls. Being a relative of the Big Muff I was expecting it to be more like what I was used to but with separate bass and treble controls. That’s not it at all. The tone controls are very interactive and a really broad range of stuff you’ve never heard from a Muff type can be made to happen. I had a sweet afternoon of just riffing out and playing with the tone knobs. It can go from all squashed and skinny sounding like its being played through a garden hose to the hugest fattest monster that can barely be contained. It gave me exactly what I was looking for. I could use the tone controls to help shape the attack while being able to keep the huge open fatness of those vintage Muffs that I like. I was mighty happy about that. I’ll be using this thing on the high gain setting for most anything I can imagine. It sounds great on the low setting but that’s not really my bag and I’ll be leaving it on high for the foreseeable future. But that diode switch is great! At home I was immediately taken by the ‘diodes out’ setting. It just sounded so big. I know I’m short on adjectives here but I’m more a riffer than a writer. With the diodes in it’s a little more compressed and still sounds really cool but when I switched them out it just felt like my riffs grew three sizes in an instant.

Now at the practice space I had the pleasure of plugging it into my Mig 100 stack. WHOAH! I had to twiddle a few settings on both the amp and Pharaoh to get things under control. The first thing I did was reign in the bass at the amp. With the aforementioned fat openness in effect I now had way too much bass and it sounded wrong. After figuring that out and dialing the tone controls on the Pharaoh I got it to BARK just perfect. I was psyched! The rest of band showed up and we cranked it up. It sounded okay. I was stepping on the bass player a little and practically swallowing the other guitarist. We had a bit of a dilemma. And it went on to the point that I brought out the pedal I had been using previously. That one just felt flat by comparison and I didn’t like it as much. So we plugged the Pharaoh back in and put it back to the settings I’d liked when I was playing by myself. We were scratching our heads and talking about it when it hit me. DOH! The diode switch. Leaving my other settings intact we flipped the diodes in and bam! There it was! That little bit of compression was just enough to put my sound right where it needed to be in the mix. I was still huge and gigantic but the bass was clearly discernable and the lead guitarist with his sizzling germanium style fuzz was able to cut right through it all just perfect. Me and the whole band were back to being psyched!

Alright. SHOWTIME! I took my Pharaoh to the stage a couple weeks ago and it was fantastic. It made a noticeable improvement from my perspective and the rest of the band agrees as well. Audience members in the know were mentioning the extra heavy in both my tone and the overall sound of the band. Players from both of the other bands were very curious about the sound. One guitar player had a hundred questions about my whole rig and the bass player from the other band said “I’ve never heard guitar tone like that, that was killer!” Pleasing myself, pleasing my band, pleasing my fellow musicians and most importantly ROCKING the fans. I couldn’t ask for anything more. 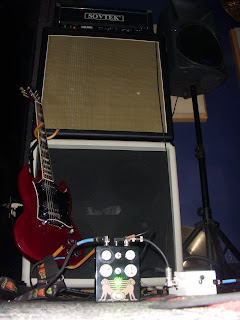 THANKS for the great review man.

Take a listen to Darren’s band. I dig them.